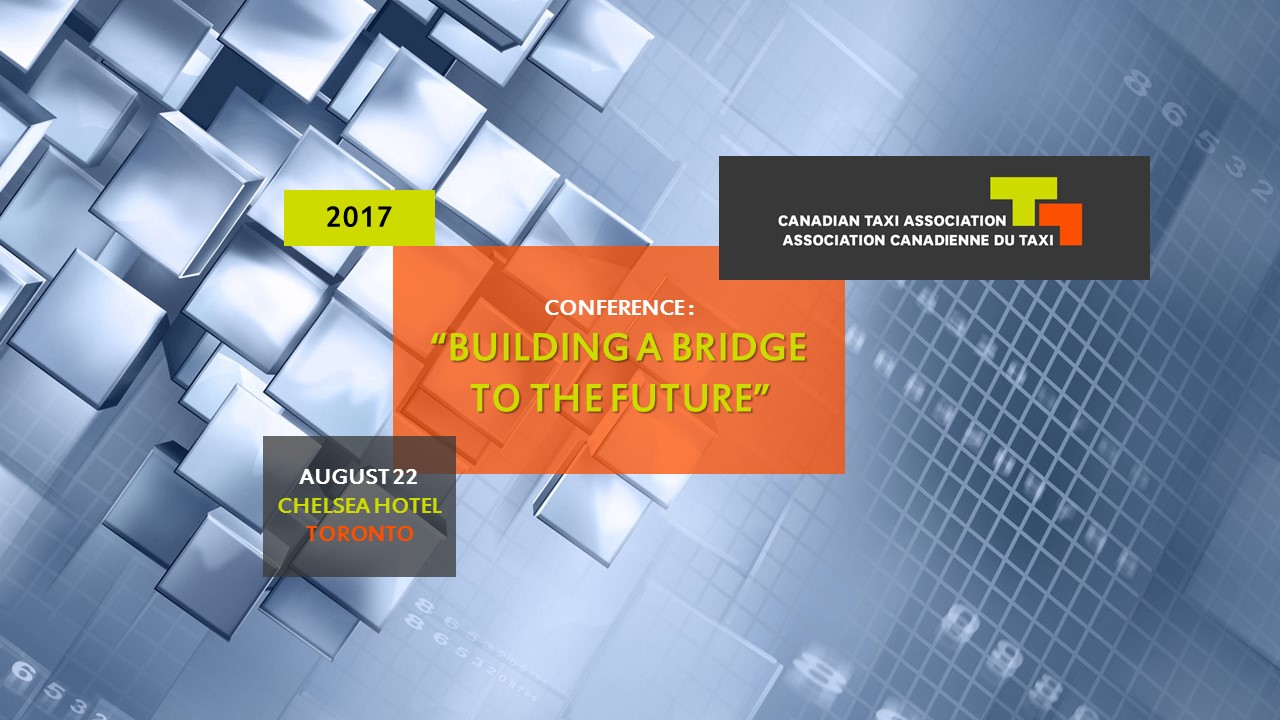 Mr. Keenan:
We are writing to address a significant inequity in the application of GST/HST that has a substantial impact on us and our members and to request a meeting with you to discuss our serious concerns.

CANADIAN TAXI ASSOCIATION
The Canadian Taxi Association is the voice for Canada’s taxi industry. Our members consist of the largest taxi companies in most major cities across Canada. We speak for an industry of 30,000 taxicab owner-operators and over 50,000 taxicab drivers, which undertake over $2 billion in consumer transactions annually.

UNIFOR
Unifor is Canada’s largest private sector union, with more than 310,000 members across the country, working in every major sector of the Canadian economy. Over 30,000 of our members are employed in federally regulated sectors including transportation, communications, and financial services.

GST/HST AMENDMENT REQUIRED
All taxi operators in Canada are required to be registered for GST/HST purposes and to charge and collect, report and remit GST/HST on their fares regardless of their annual revenues.

Ride-Sharing Companies (“RSCs”) – such as Uber and TappCar – and their drivers are not required to be registered, typically are not registered, and do not charge and collect, report or remit any GST/HST.

This creates a significant competitive disadvantage for our drivers and members, and provides a direct competitive advantage to RSCs and their drivers.
Accordingly, we call on the Government of Canada to address this clear inequity by amending the Excise Tax Act (“ETA”) to require the registration of all RSCs for GST/HST purposes – regardless of whether they are located in Canada or outside Canada – and to impose an obligation upon them to collect, report, and remit GST/HST on the fees they earn, or, at a minimum, to impose such obligation on their affiliated drivers, so as to level the playing field between them and our drivers and members.

Specifically, we are requesting one of the following actions:
• Amend the definition of “taxi business” in subsection 123(1) of the ETA, such that it will generally apply to RSC Drivers carrying on business in Canada. As a result of this amendment, RSC Drivers will be required to register for GST/HST, regardless of whether they are considered “small suppliers” under section 148 of the ETA, and to charge and collect GST/HST on their fares; or
• Introduce provisions in the ETA which impose a GST/HST collection obligation on RSCs, rather than RSC Drivers. This could be accomplished by introducing a simplified registration for foreign-based digital service providers, and a further provision which deems that RSCs, rather than RSC Drivers, are the suppliers of the transportation services.

The Canadian Taxi Association represents 100’s of taxi operators from across the country.

Our mission is to develop a respected and vibrant taxi industry that is modernized, customer service centric and meets the needs of Canadians by sharing information and best practices with taxi owners and operators.

Today we are here to discuss regulation. Regulation is the key to creating a level playing field for both Uber and Taxi companies to compete.

The Canadian Taxi Association is here today to advise council that what you do in regulating taxis and Uber in the beautiful city of Toronto, will become the benchmark and set the precedence for regulation across the country.

What you do will affect over 20,000 + full times jobs related directly to the industry across the country in cities where Uber operates and the families these jobs support.

Let’s be honest, Uber doesn’t really want regulation. Just this week they denounced potential regulation put forward by the city of Edmonton. Aside from insurance, the total costs to drivers for cars inspections, background checks, licenses and administration costs was about $700 dollars. Uber said that was too much. That would be too much of a barrier for drivers and would not work for Uber’s business plan.

Uber’s business plan and goal is no regulation of Uber. That would kill the taxi industry and I do not think replacing 20,000 FT jobs that supports our local economies across Canada with PT, Casual or even transitional employees would be good for any economy. As a matter of fact I wish you would do a study on that as part of this regulation process.

The CTA has observed this phenomenon for quite a while and It seems Uber is constantly rewarded for breaking the rules and laws, disrespecting politicians, insurance companies and even their consumers and their drivers by putting them in dangerous situations, while taxi operators are punished through lack of enforcement for following the rules and laws cities stated they had to abide by, laws you said they have to abide by. An example of this is the insurance issue. We know they do not have the proper insurance to protect consumers but yet they are still allowed to operate and this puts public safety at risk and could make the city liable for allowing it to happen.

And now they are working with Intact insurance to create new products and services that will actually cover customers and drivers. This is an admission they don’t have proper coverage, but we all know that. I can tell you this, if they do create new insurance products for Uber drivers at a much cheaper rate, the Canadian Taxi Association will lobby to have those products offered to taxi drivers as well, because aside from the app the service provided on the street by both Uber and taxi drivers is getting people from point A to point B for compensation, so those new insurance products should apply to taxi drivers as well.

A brilliant man once said “The definition of insanity is doing the same thing over and over again expecting a different result.” That brilliant man was Albert Einstein.
Uber wants no regulation for them to operate their business as they want too, but we have seen what has happened with deregulation before in the industry in the 30’s, 70’s and today in so many part of the states where Uber is working under almost no regulation and that is the Race to the Bottom. Please don’t do the same thing expecting a different result, because it won’t happen. Please don’t make Albert Einstein role over in his grave.

OTTAWA, ON, August 18, 2015 – The Canadian Taxi Association (CTA) is proud to announce that it has retained the services of former president of Diamond Taxi in Toronto, Canada as the new Executive Director of Operations and Member Services for the Canadian Taxi Association.
“The CTA is proud to have Jim Bell join our association as Executive Director.” said CTA president Marc Andre Way. “Jim brings a wealth of knowledge to the association. He is a subject matter expert in the areas of regulation, customer service standards, safety and lobbying. He is well connected to the entire industry not, only in Canada, but in North America and globally.” continued CTA president Marc Andre Way. “With over 25 years of experience in the industry Mr. Bell is the perfect person to assist the CTA in achieving its goals and vision. He has witnessed the effects of deregulation, impact of changes in technology including dispatch systems, meter units and the ways in which we hail taxis.”  Read More

CTA Positions as the Voice of Canada’s National Taxi Industry .

OTTAWA, ON, July 9, 2015 –With the taxi industry at a crossroads, the Canadian Taxi Association (CTA) is stepping up to provide a unified voice for the nation’s taxi industry in the ongoing national dialogue centred on regulation and transformation with a new mandate, a new look and a new website. Marc Andre Way, owner of Capital Taxi in Ottawa and vice-president of Coventry Connections, has been appointed President of the CTA.  Read more

When you become a member, you get media updates sent to your inbox daily, Join Now!

How the CTA can help my operation

Tools + resources for my operation

How the taxi industry is improving my ride